Dawn D'Arcy: Another Voice about CBGB's 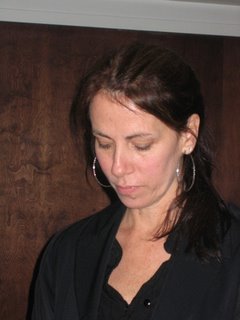 Dawn is a kickass bass player, yoga teacher, Actor, Writer, Reiki Healer, Mother of Two, Bartender, and a real pal. I am one of many people lucky to have her in my life. She sent me this email about CB's.

I just read your blog. I always really enjoy it. I do have to say something about Hilly and CB's, though. I have a very good friend who works for the Homeless organization upstairs from CB's (also Hilly's landlord) and he had not paid rent in ages and was given a million opportunities to make good - he never did. He was also notorious for abusing musicians (as in no pay).
It really burns me to see him portraying himself as a victim. He's made his bed.

Yes, you can quote me on Hilly. He's the reason CB's closed. No bad landlords – no one trying to do him wrong. Everyone gave him a zillion opportunities. Now, he'll get rich on the CB's name alone...if he's as shrewd as I think, he's got the rights to it. He probably did right, later on, by Patti Smith and Debbie Harry and Talking Heads etc. because he had to - but...oh, well...
Posted by Diane Spodarek at 10:52 PM

I just wanted to say hi to everyone

What online zines do you read and would recommend?

For all you punkrock people out there I recommend The Enough Fanzine. It is one of the first rock ezines on the www.

They have throusands of interviews from the most independent bands all over the world. Check them out online: [url=http://www.enoughfanzine.com]Enough Fanzine[/url]. Best of it all, they are 100% non-profit and just helping the scene!

Looking forward to your recommendations.

It is my first time here. I just wanted to say hi!

I love dangerousdiane.blogspot.com! Here I always find a lot of helpful information for myself. Thanks you for your work.
Webmaster of http://loveepicentre.com and http://movieszone.eu
Best regards

I would like to thank You for being the member of this website. Please allow me to have the possibility to show my satisfaction with HostGator web hosting. They offer professional and quick support and they also offer some [url=http://ceskeforum.com/viewtopic.php?f=67&t=721 ]Host gator coupons[/url].

I appreciate HostGator hosting, you will too.