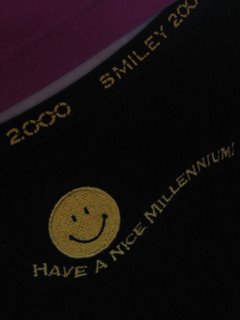 Self Portrait Smiley Under Pants

Yesterday I bought five pairs of panties from a store that said: “No Return of Underwear.” Not one fit.

Today I bought three pairs of panties form a store with a sign that said: “No Return of Underwear. No Arguments.” They don’t fit, but one has a nice message.

Today I looked at myself naked.

There are long, hair-thin red lines across my body: arms, breasts, belly. They are slightly raised like a fresh tattoo. Where have they come from? I’ve been touched by something so light I didn’t feel its arrival. In my bed? In the store? At the dentists’? Or is it here on Canal Street penetrating through windows tightly closed to keep out the heat of the city. In this air conditioned home, am I living in a haunted apartment? Or did Ma B the curious ghost in Pukerua Bay follow me to New York from New Zealand? The air conditioner is old. Is it the same one that sat in the window prior to 9/11? If so, then I am living with many ghosts trapped in this city where the living won’t let them go.
Posted by Diane Spodarek at 2:02 PM 1 comment: Links to this post 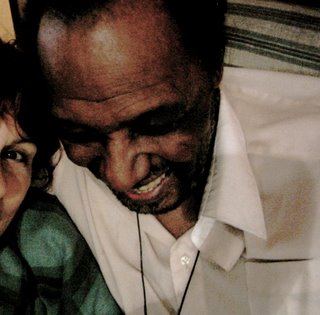 Saturday, July 30, 2006
Getting some sugar from Steve
Posted by Diane Spodarek at 10:01 PM No comments: Links to this post 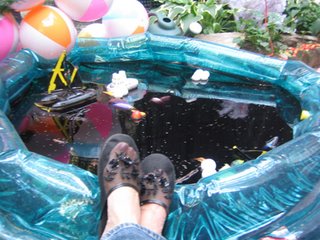 Hanging out by the black pool in the garden at Tribes Gallery, on East Third Street on the LES, there for the annual art auction and exhibition. Great time chatting with Steve Cannon, owner of Tribes. The auction raises money for the space and for Steve to continue his fabulous work for artists, writers and the community. The black pool is part of an installation in his garden. Tribes Gallery, the only visual arts gallery in the world curated by a blind man. 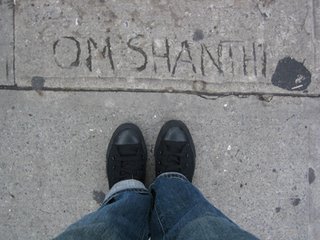 Posted by Diane Spodarek at 11:21 AM No comments: Links to this post 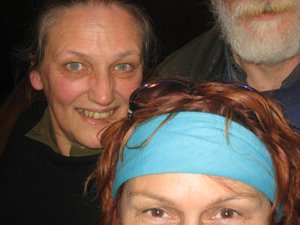 with marge and barry, red dog cafe, wellington, june, 2006
Posted by Diane Spodarek at 2:34 PM No comments: Links to this post 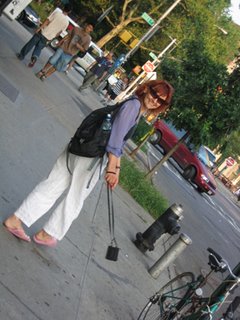 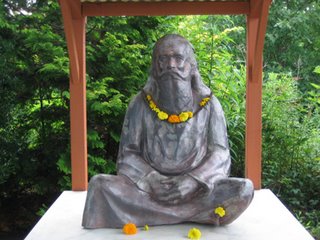 The Meditator: My eyes were closed but I knew it was her when she left the room, a few minutes later she came back, her presence announced by the rattle of the door knob, then a sudden slam and the door closed behind her with a dull click. I felt her pass me with a carefree air as if she was entering a shopping mall, her scent momentarily distracting my own space. She walked back back to her mat as if she was the only one, the only one in the room. She had a distinctive walk: a drag and a shuffle, her back foot would drag behind her as her front foot shuffled ahead, shoulders drooping toward her belly, head moving forward past her shoulders, eyes fixed, chin jutting. I opened one eye and stole a peek in time for me to see her plop down on her mat, cross her legs and look around the room like a three year old waiting for something to happen and then like a three year old she suddenly noticed that everyone was still meditating in the exact same positions as when she left. She shrugged her shoulders, moved her head from side to side, as if remembering, ‘oh yes we are meditating’ and closed her eyes, her smile intact in the moment, in the present, oblivious and yet there.
Posted by Diane Spodarek at 5:43 PM 1 comment: Links to this post 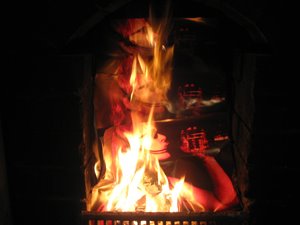 Posted by Diane Spodarek at 10:41 AM No comments: Links to this post 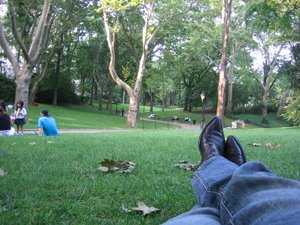 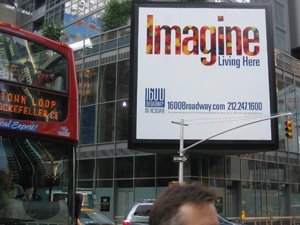 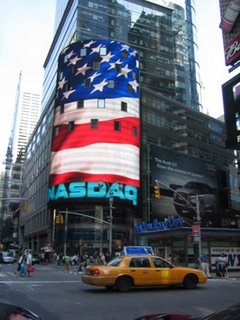 I’m still walking on the left, crossing wrong, horns honking, people moving as one and a sea of bodies, grid lock, body lock, couldn’t move, waited for the flow to move me away, away from them, walking walking, walking, familiar sites, Empire State Building, Broadway, (The Color Purple is now a musical), Madison Square, Times Square, heat so heavy and hot you can see it, vapor rises and is stuck above my head, pushing on my shoulders. I craved something in nature. I made my way to Central Park, walked over thirty blocks in my cowboy boots, feet throbbing, I hit the grass, laid down on my back, head on backpack and inhaled deeply, nothing more sweet then grass when you haven’t touched it in a week.

The day I arrived in New York, TV broadcast the 'Sex and the City' episode I was in, so friends say, ‘hey, I just saw you in.... I was thinking of you because I saw you in... ‘ It’s such a small part I’m flattered people knew it was me so with confidence I headed off to an agent who called me, ‘Come in so we can get a look at ya.’ He gave me a full minute of his time, but I may be exaggerating by ten seconds; he sized me up in three seconds and said, ‘you’re a redhead, your resume says blonde, you should change it.’ I thanked him profusely while he eyed his lunch waiting for me to split. Back on the street I bought a cotton dress for $10. This is the New York I remember, street vendors including those selling hot dogs in a vat of boiling water with a smell like old sox on every other corner. I miss Thelma and Louise, my two islands from my sea view who appeared with the tide out my window in NZ. And no fantails in New York City follow me, eyeing me with curiosity. But we do have birds here. I heard them in the park.

I went to a party and saw friends I haven't seen in so long, they didn't even know I was gone. This summer there is Hamlet in the Parking Lot, a Lower East Side annual summer event. A theatrical group performs Shakespeare every summer. If you are lucky you might see a local drunk who will walk right onto the pavement, into the performance space, stop and watch, then the audience begins to laugh, he (or she) will look at the audience, smile and continue watching, sometimes walk away, oblivious, sometimes not.

I'm staying in Olivia's apartment on Canal Street in Chinatown, part of the new Lower East Side. New and improved. Average rent two to three thousand a month. There are two bars below me, both with enthusiastic patrons. The building shakes from the subway, not unlike the soft earthquakes I felt in my cottage in Plimmerton. The sounds of helicopters are now part of my sound landscape along with the garbage trucks that arrive promptly at 4 a.m. at the moment when I’m about to fall asleep. Jet lag is a drag.
Posted by Diane Spodarek at 12:13 PM 1 comment: Links to this post