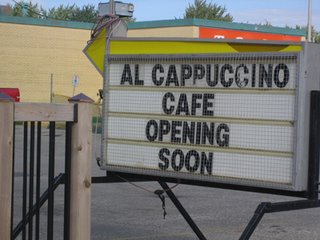 My favorite sign in the small town of Belle River, Ontario where I've been visiting family in Canada. A fond memory of Al Pacino: When I was working at the Actors Studio under the direction of Estelle Parsons for an Oedipus show Pacino was rehearsing, Al Pacino asked me to get him a hot chocolate. When I served him I held the cup out to him in a way that Al would have to touch my finger when he took the cup. I would like to say I was fourteen when this happend but in fact it was only a few years ago.
Posted by Diane Spodarek at 9:48 PM No comments: Links to this post 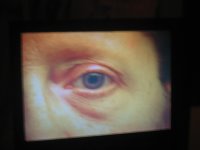 It wasn't until I looked up while squatting in a women's toilet in Louisville, Kentucky, that I noticed a moving (and life size) eye staring at me from above the stall door. It was an installation by Sean Bidic, entitled, "in the absence of voyeurism". Proof Bar/Restaurant/Gallery. Sept., 2006. It was a surreal moment to be watched while pissing, and then to come out of the stall and see there were many moving eyes that didn't quite look right all over the mirror. On the side of the mirror I read the artists' statement: "... the blind eyes of seven people from a blind dart throwing group are captured on individual video and displayed on life-size LCD monitors embedded in mirrors. ..” It was interactive art without consent, just like the presence of voyeurism, but that may depend on which end of the voyeuristic stick one is on.
Posted by Diane Spodarek at 10:16 PM No comments: Links to this post 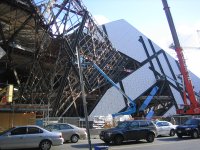 Toronto, Ontario. Museum under construction.
This museum is the eighth largest in North America where I learned from an exhibit that all that I am and all that I see was built on the backs of child slavery as young as four years old. Laws were eventually made to raise the age, lower the hours and at some point they were even paid. The museum is across the street from the Four Seasons Hotel where I stayed with my sister and parents: the gym was free, with a hot sauna and a heated pool and the disposable bathing suit was only ten dollars.
Posted by Diane Spodarek at 2:26 PM No comments: Links to this post

I Inherited A Crack House 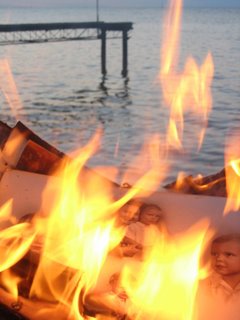 I inherited a Crack House.

Dad and I interred my cousin Billy’s ashes today with his deceased mother Lenora at Greenlawn Memorial. No one else was there. Grieving time is over, reality sets in: Lawyers want $275/hour to put the estate through probate, a necessary legal process when there is no will. Lawyers will not predict how long and how many hours it could take, no ceiling on their fees, but tell me with sincerity that it is well worth it to go forward!

Cousin Billy always told me he wanted me to have his house because I was the only relative who would speak to him. As an addict I know it was not Billy who did the things he did, or said the things he said when he was high...But now, there is nothing to do but put the antifreeze in the pipes, turn off the water, pay the neighbor kid to cut the grass, and let nature take its course -- which is unpredictable -- but probably means the Queen will take it when the unpaid taxes come due.

Since Billy was on the dole, I guess what goes around has come around. Sorry Billy. But at least your last wish has come true, you and mother are together in death forever... Goodbye Sweet Billy. May you rest in peace.
September 22, 2006
Posted by Diane Spodarek at 2:15 PM No comments: Links to this post 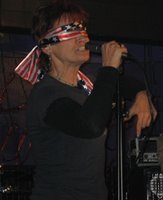 Finally. Myspace.com removed the false pages of my identity. So now it's the real me on soundclick.com and myspace.com. It's quite a violation of one's spirit to see fraud and theft of your name, image, music, work, and to read things attributed to you that you never said!!! I hope my karma is up on this one.
Posted by Diane Spodarek at 6:11 PM No comments: Links to this post

Gateway to the South 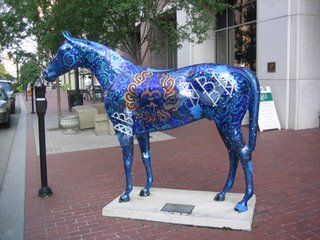 Louisville, Kentucky. Gateway to the South where I am treated like a queen in this land of southern hospitality, Churchill Downs & the Kentucky Derby, and the burial ground of Colonel Sanders of Kentucky Fried Chicken fame.

I was treated to a massage and pedicure and later I danced to Jimi Hendrix prompting me to think of J and sending off an email to him in New Zealand. J is a big Hendrix fan and tells me I missed the coldest winter in NZ.

I am being driven around in a 2006 911 Porsche, tooling down the highway and back streets of Louisville where Tom Cruise used to play.

Andy the Roc Doc took us out to the theatre where we saw a NY play, “Gone Missing” at the Actors Theatre, home to the famous ten-minute play festival and where I blew positive energy kisses into the space in hopes of acceptance of my short play about NZ, which I submitted almost a year ago.

Last night we went to a dinner party at Larry and Ed’s with other guests, friend Henry and international torch singer and star Barbara Sodd. Barbara and Larry have played music together for years but last night Larry’s vegetarian lasagna (with only a little meat in the sauce) was top billing. There was also ‘fall on the floor laughing’ jokes and many hugs. I felt right at home. When we left, I walked down the porch steps passing a ceramic dog who wags his tail and farts, when you clap your hands (you had to be there), 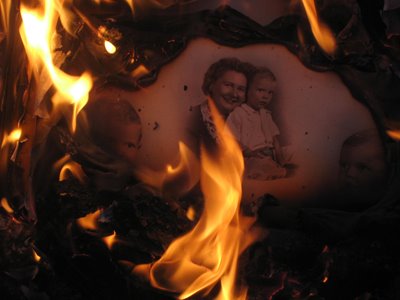 Mother & Son
together in the fire
ashes blowing over
Lake St. Claire
survivors watch
drink tea
tell stories
laugh
cry
why
Posted by Diane Spodarek at 4:33 PM No comments: Links to this post

Madonna Waterfall, New Zealand
Untouched photo of the miraculous appearance of the Madonna in a waterfall while hiking in a secret location in the South Island while contemplating if I should move to NZ to be with my Kiwi lover or stay in New York and be famous.
Posted by Diane Spodarek at 2:03 PM 1 comment: Links to this post

“An autobiography can distort, facts can be realigned.
But fiction never lies; it reveals the writer totally.”
VS Naipaul
Posted by Diane Spodarek at 1:48 PM No comments: Links to this post 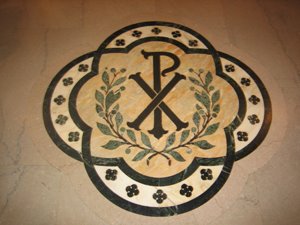 Posted by Diane Spodarek at 4:45 PM No comments: Links to this post

Dancing under the moon light
In a farmer’s field
Feeling the pulse of the band in the barn
I let go
And decide
No
Posted by Diane Spodarek at 1:14 AM No comments: Links to this post

Kudos to soundclick.com. This space has removed all the fraud that was posted under my name: images, music, everything. They read my email and acted.

Re: myspace.com: despite many emails in the past two weeks I have yet to hear from them regarding stolen images and the illegal posting and sale of my music; Even worse, someone claiming to be me is saying things as if she/he is me, making me sound like a bitter castrating victim of outer space.
Posted by Diane Spodarek at 1:10 AM No comments: Links to this post

funerals make me sad
funerals make me cry
this feeling is so overwhelming
it feels like it will never die
Posted by Diane Spodarek at 10:27 PM No comments: Links to this post