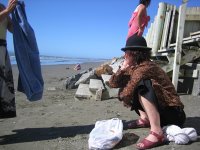 I am sad to say that Sally Rodwell died on October 14, 2006 in Wellington, New Zealand. Sally suffered from depression and took her own life on the beach in Island Bay. Sally was the co-founder of Red Mole with her late husband, Alan Brunton. Red Mole is an experimental and political theatre group that has traveled around the world. I first met Sally and Allen in New York in the early 80’s when they were living here. Sally is survived by her daughter Ruby and many many friends. The funeral is Thursday and a celebration of Sally’s life will be Sunday. All times are NZ, which is 17 hours ahead of US time.

I was fortunate to see Sally in New Zealand this past year on a few occasions. Here’s Sally on the beach in January, 2006 after a Magdalena Aotearoa get together in Paekaekariki. That day she gave me a ride home.

Farewell Sally. May your spirit soar and find peace.

Messages can be sent: http://www.themagdalenaproject.org
Posted by Diane Spodarek at 12:49 AM