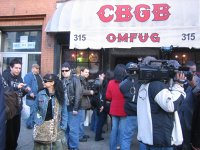 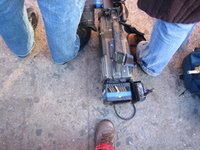 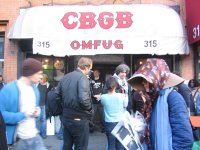 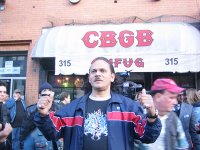 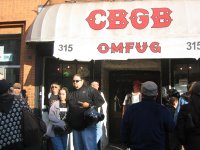 And another Crack and God story.
October 15th I headed over to CBGB's, the infamous punk rock club on the Bowery to see if I could get in on the last night. I couldn't but took a few pictures from the outside including Hilly (founder of C B's) going to his car before the evening began. I'm proud to say that in 1980 CB's had my record "Potentially Dangerous" in their juke box.

The pic of me under the logo (back of the head, red hair) was taken by Bruno, who is from Paris. We met while leaning on a black SUV. We had the best spot for picture taking. Bruno was in town for the "Evil City Film Fest 2006" in the East Village. His film, "Bandidos" premiered at Cinema Classics on Friday 13th. "Bandidos" is a 90 minute feature: "In the heart of the parallel society of American highways, the drifting love of John, crossing the USA, and Jane, smalltime highway robber." Keep an eye out for future films by Bruno Hadjadj.

We chatted and took pictures and waited for Patti Smith. Bruno is the one with the skulls' jacket. After a bit, I went into CB13, the cafe next door, to buy a t-shirt. When I came out, a crack-head on the side walk said he liked my earrings. The following is what happened.
Did you buy them?
No, they were a gift.
From your man?
No.
No? From your woman? Are you a lesbian? Are you a f....faggott? I don't get down with that. That is against god you.....f.....fagg......
The crack head came at me with his bulging eyes and saliva-drooping mouth and an I don't know what intention. Suddenly Bruno appeared, quickly took my arm and we ran up the Bowery. We found a cab and pleaded with the driver to open the door since we were being chased --(the crack head was slowly making his way to us screaming f....lesbian....). The cab screeched away almost running over Bruno's foot. Another cab appeared on the scene and we jumped in and went to the East Village to the Orchid Lounge on East 11th Street to see his friend Michael Dorian's movie: "Pizza" a documentary about people who see pizza as...god ... including an internatiional acrobatic pizza tossing competition in Naples....bizare and funny....

I heard lots of gossip on the street that night including that the owners of the building that CBGB's resided in wanted $30,000 rent per month. Hilly said forgetabout it and is going to have the entire insides, inclulding the gross toilets, escavated and rebuilt in Vegas. Somehow I can't get my head around Iggy Pop and Patti Smith or even the White Stripes playing CB's in Vegas. Maybe Madonna can get a baby sitter and do it...
Posted by Diane Spodarek at 11:44 PM