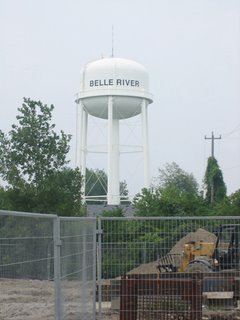 Red White and Blue Paint. A story about a patriot.

When I was fourteen I had a date with an older boy of sixteen who lived at a cottage two doors down from ours. I played that summer with his two sisters and one day he invited me to see Dick the Bruser at a Wrestling Ring in Windsor. It was pretty cool, we were on TV and excited. After we decided to just be friends and not try to do the boyfriend girlfriend thing.

That summer this Detroit boy, (who’s first name I’ve forgotten, but his last name was Gimelli) decided it would be very cool to paint an American Flag on the Belle River Water Tower, which he did in the middle of the night. Word of the vandalism spread like wild fire and we all went to town to stare at it. It was actually a pretty good job, and people stood around wondering how anyone could have painted such a large flag on the tower. And there to watch the reaction to his crime was the boy in his white Converse Sneakers, which were covered in red, white and blue paint.

Soon after his family was forced to sell the cottage and get out of town. I imagine today he is sitting in a jail somewhere along with other brutes, or possibly serving as an officer in the American Army.
Posted by Diane Spodarek at 5:23 PM