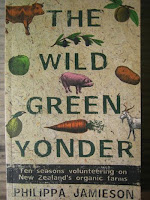 The Wild Green Yonder is a personal story and an introduction to organic farming in New Zealand from a Woofer's point of view. A woofer is someone who lives on a farm and in exchange for four to five hours of work a day, receives room and board while learning about organic farming. It's also a way some foreigners choose to travel through New Zealand.

Traveling from her home base in Dunedin in the South Island, Philippa Jamieson, a vegetarian who was already familiar with an organic lifestyle and the importance of sustainable farming for the future of New Zealand and planet earth, wrote this book while traveling all over the country.

I enjoyed the book and as a vegetarian myself I was curious how others see their lives in relation to this choice. (Most consume dairy as part of their diet, but the pros and cons of how some farmers use animals is not part of this essay.) This book is well written and lively. As a non-New Zealander though I had to look up some flora and fauna definitions to understand what I was reading about. Gorse is a universal weed and I learned that left to it's own, gorse actually protects native bush. It's the human interferences with weeds that have created the (global) mess it is today.

I also learned that organic is never pure, not anywhere. Just like buying pollution points to continue to pollute, you can get a way with some non-organic practices according to organic regulations. It's disturbing that we are already over the brink and nothing is 100% organic today. If you are looking for an adventure, woofing is a way to discover New Zealand and meet-- according to Philippa -- wonderful people who also cook delicious meals -- and also serve lots of wine. For some reason, Philippa stayed with people who seemed to drink a lot.

The book makes the reader very conscious of where our food comes from. For instance, one farmer uses seaweed for fertilizer, which he buys from Canada. It is impossible to fathom why seaweed has to be imported to a country surrounded by the sea.

Maori had to be the first farmers in New Zealand but they are not mentioned in the book. Either they don't own any organic farms or Philippa did not visit them. The majority of owners seem to be German. There is a large population of Germans in New Zealand as residents and tourists both. (I'm writing this from a tiny sea-town in the North Island called Ngunguru; the local motel down the road has a sign out front: "Die Speiche Deutsche.")

There are plenty of stories about the people the food and traveling that keep this book an enjoyable read. It's also a great guide to woofing and the farms that are listed who are registered as woofer friendly. It may, like for me, make woofing look very attractive; but be warned, it could bring on changes to your sexuality, like it did for Phillipa -- but you'll have to read the book to find out the details about that.
Posted by My Blog at 9:50 PM

Hi Diane,
Thanks for your positive review of my book. You've said that I didn't visit any Maori farms, but in fact four of the places I visited had Maori people living there.
I wwoofed near Kawakawa in Northland for Te Roopu Whakatupuranga o Waiomio, a hapu-based trust – see page 85-87 in the Communities chapter. (A hapu is a sub-tribe group.)
Also I stayed with a Maori-Pakeha family on the East Coast – see chapter 7 "East Coast". And I stayed with two other Maori woman (separately) who I didn't identify as Maori as I only mentioned them briefly in the book.
Also I'm not sure where you got the impression that there were so many German hosts – only three of the households I wwoofed at (out of 40) had Germans living there, although there were a few German wwoofers too of course.
Cheers, Philippa Jamieson