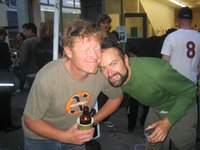 Kazz and Neil
and

There were a few red dots on the art works with cheap prices and no names opening night. Markus McIntyre, Craig Ireson (The Word Collective - wordcollective@gmail.com) and dadashopping.net put their collective heads together and gave birth to an exhibition without a catalog with the philosophy: if you like the art, you will buy it, regardless of who made it. The four walls were filled with various collages. The artists were asked to recycle: images from print using photo chop, real scissors and glue because photo shop is already getting boring. The exhibition (from the non catalog, hand out paper...”....salutes the dawn of photolithography, the 120 years old tradition of processing images for the mass print medium... give the new images a montage of new meaning.”

I walked around the room looking for political art, making judgments deciding which was good, which was not good, what would look good over my sofa, or over the toilet. I saw the word dada here and there and looked for Duchamp imitators, maybe a Man Ray there and there, but nada. Then suddenly, political art!! I saw two from about 100 images or more. Then I looked for the artists, not to buy but to get their names and was told by McIntyre and Ireson that it’s not about the artists. It turned out one of the pieces was by McIntyre: Three Santas sitting in front of a graffiti wall with the words: “Les Incorruptibles” above the jolly old men and a Brazilian-looking child of about six smoking a cigar in the foreground. The second collage had various men including Idi Amin, Osama Bin Ladin and an unidentified shirtless man with no arms with a t-shirt that read: “Faggots did this to me.” It was made by Ruby Nekk. Both were strong political statements that really brought issues to the front. There was something there for everyone, or not. Some of the work put any image with another without much thought, such as a standard porn image of a woman's genitals, spread eagle, coming out of (or going into) a woman's nose.... and other places....Okay, it may sound interesting, but I wouldn’t put it over my toilet.

There's plenty of time to check it out. Since I attended the opening after rehearsal of my two new short plays (Marley & Rachel and In the Cellar of My Heart) with N and K, we missed out on the finger food, so we chatted with the artists and then went to Fidel’s on Cuba Street where we had political tea and coffee while looking at Che Guevara’s photo in the back room. 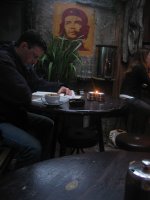 Posted by Diane Spodarek at 2:03 AM